Black as Drought: Ecological Entanglements of the African Diaspora 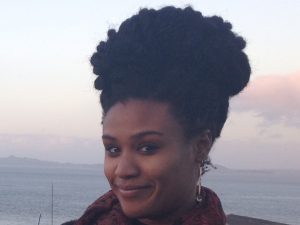 In the poem “ca’line’s prayer,” Lucille Clifton marks the progression of Black generational memory through the metaphor of drought, narrating a female ancestor’s voyage from Dahomey to the plantations of the United States South, reconfigured here as a “desert country.” The 1969 publication of “ca’line’s prayer” in Clifton’s Good Times coincided with one of the worst droughts in modern history. Across the West African Sahel late rains and famine induced by the vagaries of global racial capitalism led to the deaths and displacement of hundreds of thousands of people. Starting from this conjunctural moment in the late 1960s and using Clifton’s provocation about the “Blackness” of drought, this talk contemplates representations of arid environments in African diasporic texts. I consider various imaginings of arid spaces, presented simultaneously as wasteland and homeland. And I show how these portrayals of actual and imagined deserts reveal alternate modes of encounter forged through Black/African environmental thought.

Select Williams facilities and events are open to the public. Admission tours are available and guests are welcome at the Williams College Museum of Art, Sawyer and Schow Libraries and outdoor athletic events. Visitors are also welcome at indoor competitions and some performances and events. Proof of vaccination and masking are required for entry. See the Visiting Campus page for details.

Local Beef for Williams: “The Quest for B(Eph): Sourcing from Local Farms” Envi Planning Students
12:00 pm at The Log