On November 5, the Log Lunch community had the pleasure of hearing from Don Zasada, owner of Williamstown’s Caretaker Farm. As one of the first Community Supported Agriculture programs in the nation, Caretaker Farm exhibits how sustainable agriculture and community-building can work together, creating a nexus that both feeds and inspires people in the Berkshires and beyond.

Situated on 35 acres of ancestral Mohican land, Caretaker Farm was originally developed by Sam and Elizabeth Smith in the 1960s. In 1991, the Smiths began a community-supported farm. Two decades later, 290 families purchased shares in Caretaker’s Summer CSA, allowing them to receive fresh produce throughout the summer months in exchange for a membership fee and two hours of work on the farm. Inspired by the work of Wendell Berry and the intellectual fulfillment of small-scale agriculture, Zasada moved to Caretaker in 2005 and worked with the Smiths for a year. He then signed a 99-year lease with the Williamstown Rural Lands Foundation, allowing his family to live and work the farm for (at least) the duration of his and his children’s lives.

Zasada spoke about the wide range of crops and projects presently occurring at Caretaker. The farm grows over 100 different types of vegetables, sells baked goods in their bakery, and is currently home to 100 chickens and 3 pigs who naturally fertilize the soil. Eighty percent of the farm’s crops are harvested for families, and 20% are picked by the families themselves — a process which, Zasada noted, allows people not “to just see sustainable agriculture, but to experience it.”

The farm is able to bring people together in a range of innovative ways, even offering options for the elderly and those with disabilities to perform important labor. From a “Rock the Farm” party where children and adults alike dig out rocks in early spring, to a series of Pizza dinners, to a summer solstice celebration, Caretaker allows the local community to connect with the land in every possible season. 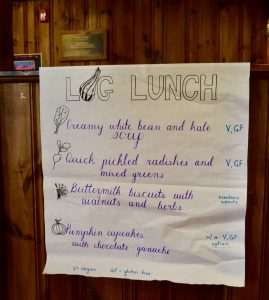 The lunch this week consisted of a creamy white bean and kale soup, quick-pickled radishes and mixed green, and buttermilk biscuits with walnuts and herbs. The dessert was a pumpkin cupcake coated in chocolate ganache. The meal’s carrots, radishes, and greens from Bigfoot Farms. The garlic was from Peace Valley Farm, and the buttermilk and butter were from Gammelgården Creamery.

Log Lunch is a CES program hosted every Friday at noon. During Log Lunch, a vegetarian meal prepared by Williams students is served, followed by a talk on an environmental topic. Speakers are drawn from both the student body and faculty of Williams, as well as from local, national, and international organizations. Learn more here.

Please visit the Covid-19 website for the latest information, including details about vaccination, testing and mask requirements, and policies for off-campus visitors.