"Due North: Living, Researching, Writing - The Russian North Pacific in an Era of Climate Crisis" 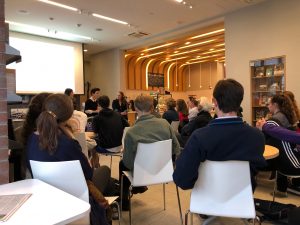 On this particularly cool day in early October, Bathsheba Demuth and Julia Philips took us on a journey to a much colder part of the world. Both of them have lived in and authored recent books about the arctic region, and they shared some of what they have learned through personal experience and their research. Philips had an early fascination with Russia, and ended up in Kamchatka to combine her passion for writing and for the area. She found that it was much more beautiful and complicated than she ever could have anticipated, and the experience was not only humbling but also important for her career as she was the only American correspondent for Kamchatka. Demuth, an environmental historian, first went to a small village in Canada to train sled dogs, and has since done historical research there which has been freeing because she is one of the few historians focusing on this region.

On the issue of climate change impacts in the Arctic, both authors spoke about them as legacies of colonialism – not only were ‘ways of being’ imposed on the landscapes and peoples that did not operate well, but decision-makers have always been far from those who are impacted and do not have a first-hand understanding of what is happening to the people, animals, and landscapes. The average temperature for some places in the far north has already increased an astounding 4C, and massive animal die-offs and changes to the land are occuring. However, the authors both pointed out that in these regions climate change is much more commonly discussed as an acknowledged fact of life, and as a problem that the people will adapt to just like countless dramatic climate shifts that they have dealt with in the past.

President Maud S. Mandel has announced plans for the fall 2020 semester. Please note that all Williams College buildings are closed to the public until further notice.