Greg Watson, the current Director for Policy at the Schumacher Center for a New Economics, gave a Log Lunch talk that focused on the question of how to reconcile environmental quality with economic equality and equity. He emphasized the importance of equity, because it is not enough for everyone to be treated the same (equality), but rather everyone needs to be given what they need to succeed (equity).

He spoke about some of the many entrenched systems today that are highly inequitable, and that disproportionately harm or exclude disadvantaged communities of color. In asking how to change these systems, Watson quoted one of his teachers Buckminster Fuller: “You never change things by fighting the existing reality. To change something, build a new model that makes the existing model obsolete.” Watson used the Dudley Street Neighborhood Initiative as an example of a process that he was involved in that did just this. In this multicultural, low-income neighborhood in Boston, the community organized to make a comprehensive urban renewal plan that would not result in gentrification, which is what usually happens. The Initiative went through an intense planning and visioning process, and the resulting plan was based on what the community wanted to see in their neighborhood. They ensured community wealth by gaining eminent domain over the land and putting it in a trust, and worked on “place-making” projects that made the neighborhood a successful urban village for the people who lived there. 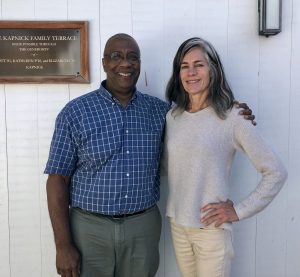 In response to COVID-19, activities and programs at Williams are canceled or postponed until further notice. See information and updates on Williams COVID-19 response.