Cecilia Del Cid, the Assistant Director of the Davis Center at Williams College, is a biologist and has a Masters in Forestry. She said that her passion for this work started when her parents bought a small track of jungle in Guatemala. She had grown up in Guatemala City, and this parcel of land introduced her to the “beautiful vulnerability of Guatemalan tropical rainforest.”

After attending an all-women’s Catholic high school she went on to do a program in community service, and then applied for a scholarship program. She ended up at a Berkshire Community College, and then transferred to Smith to major in Biology. Throughout her time in college, not only was she learning science, she was also working on her English, which “was always in the way!” She worked incredibly hard, and after a year of working and with the encouragement of one of her advisors, she got into the Yale School of Forestry and Environmental Studies. After graduating she worked in Yale’s Neotropics program, in which she visited Colombia, Panama, and the Philippines, and was often the only woman on a trip.

Four years ago she moved back to the Berkshires to join her husband, and after working at the Elizabeth Freeman Center, came to work at Williams College. At an AASHE conference, a speaker said that ‘systems of oppression have brought us to the current environmental crisis, and we must address these systems in order to be able to deal with environmental issues.’ This has guided her since in her focus on environmental justice, and will do so in the future no matter where she ends up. 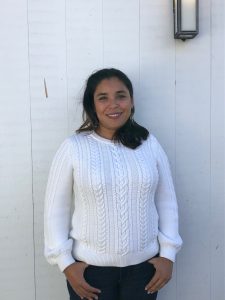