At the final Log Lunch of November, the Williamstown community gathered to learn from Norris Guscott, an Equity Policy Networks Manager at the Massachusetts Food System Collaborative and Food Security Task Force Leader in the city of Lynn, MA. Guscott began his career in community organizing in neighborhood gardens where he first cultivated his passion for the intersection of public health and foodways. Guscott has carried that passion forward in his work at the Mass Food System Collaborative where he is building an equity network with BIPOC food managers and collaborators. In his work on the Food Security Task Force in Lynn, Guscott oversees the city’s food security and develops regulations for socially distant farmer’s markets.

As the Public Health Coordinator in Lynn, Guscott is involved with advocating against rising land prices, helping farmers deal with shortening growing seasons, and addressing food inequity. BIPOC farmers currently make up less than 5% of farmers in the country, and people of color suffer from food-related disease at two to three times the rate of white residents of Massachusetts. These statistics are representative of the systems of oppression that dominate our state’s foodways, systems that Guscott works to dismantle and replace. He works directly with organizations like Massachusetts Farm to School that ensures children in underserved communities have access to education about healthy eating. Guscott increases accessibility to foods by supporting food banks in Massachusetts that provide food assistance and resources to individuals. The Phoenix Food Hub in Lynn Massachusetts, an organization with which Guscott works closely, exemplifies the importance of food hubs in communities; they have a teaching kitchen where citizens learn to cook nutritiously and provide programming for educational events and pantry space for citizens to use. Their goal is to integrate public health with food accessibility, ensuring that the community has access to food as well as an enduring knowledge of healthy food practices.

Guscott’s view of the future of public health and food equity in Massachusetts is a hopeful one. He plans to put forward the Agriculture Equity Bill, a Massachusetts House Bill—supported by BIPOC farmers along with collaborators and allies—that would provide policy recommendations based on data representing food realities. The bill was originally introduced in the past legislative session, but since it was attached to a separate economic development bill that didn’t pass, it wasn’t chaptered. However, Guscott remains hopeful, especially because the bill passed through all of the committees on its first-go which is next to unheard of for such a progressive piece of legislation. He remains confident that the bill’s reintroduction will lead to forward movement for food security, paving the way forward for a more accessible food system with a strong foundation in public health.

This week’s Log Lunch crew served up a special squash fondue with cheese and croutons, a tomato and kale salad with pomegranate dressing, lentil soup, and pumpkin chocolate chip bars for dessert. The kale and tomatoes were sourced from local Peace Valley Farms. 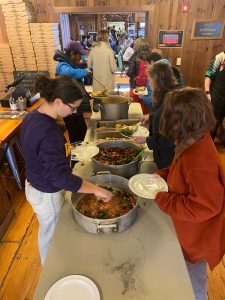 Log Lunch is a CES program hosted every Friday at noon. During Log Lunch, a vegetarian meal prepared by Williams students is served, followed by a talk on an environmental topic. Speakers are drawn from both the student body and faculty of Williams, as well as from local, national, and international organizations. Learn more here.

Covid-19 is an ongoing concern in our region, including on campus. Safety measures are in place, and campus community members and guests are additionally advised to take personal precautions. See the college's Covid-19 website for information about campus policies. For the latest research and recommendations from the CDC, visit cdc.gov/coronavirus.