Mayor Tom Bernard on the Bright Future of North Adams

Thomas Bernard has a long history in the Berkshires. Born in raised in North Adams, he graduated from Williams College and has worked at Mass MoCA, MCLA, and is currently the Director of Special Projects at Smith College.

He was elected mayor of North Adams in November 2017, adding this hat to his inventory of roles in the community, also serving important roles in various local organizations. 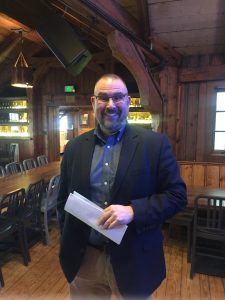 “We’re tiny, and I love it. A friend told me that they love the ‘small, weird urbanness’ of North Adams,” Mayor Bernard told the Log Lunch crowd on Friday.

He told the crowd about recent developments in North Adams aswell as what’s on the horizon: the promising Tourists’ Hotel, the national draw of Fresh Grass music festival, the much-anticipated bike path linking Williamstown and North Adams, and the Berkshire Mayor’s Fitness Challenge, an incentive developed by Bernard to encourage locals to stay fit.

With optimistic zeal, Mayor Bernard has big plans for a revitalized North Adams.

Peter Kelly-Detwiler ’83 on the Transformation of the Energy Market
Will Keating, Shauna Sullivan, Drew West in ENVI 411: Bringing Berlin Mountain Back
Center for Environmental Studies MENU