U.S. Offshore Wind Energy: An Epic Maritime Saga of Decarbonization in the Era of Climate Disruption 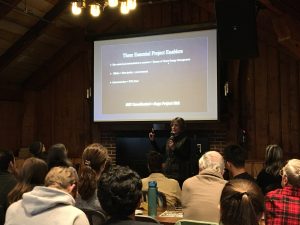 Fara Courtney is Principal of Outer Harbor Consulting and Strategic Advisor to the Partnership for Offshore Wind Energy Research. She spoke at log lunch this week about the status of U.S. offshore wind projects. After asking for a show of hands, it was clear that not many of us were familiar with U.S. offshore wind. Fara’s talk was very educational and even inspirational. She explained that off-shore wind was one of the fastest growing industries on the plant and has become less expensive, in fact it is even beginning to compete with fossil fuels. Unlike Europe, the U.S. has only just begun to consider off-shore wind, but the U.S. department of Energy conducted a study and identified the mid and north Atlantic as potential off-shore wind hotspots. The Massachusetts coast holds a lot of potential. The only offshore wind project in the U.S. is off the coast of Massachusetts near Block Island. It only consists of 5 turbines and is one mile offshore, but it has made electricity more affordable for the Block Island community and the project stands as a point where a real industry could branch from. Using an example from an old Nantucket Sound project, Fara explained how controversial and challenging it has been to build off-shore wind. There are many stakeholders, including property owners, fishermen, and environmental organizations that have different priorities and values in relation to off-shore wind. Learning from the past, the future of off-shore wind as renewable energy will depend on interdisciplinary collaboration and understanding among stakeholders. Fara believes the future of renewable energy lies in off-shore wind and she invited everyone to participate.

“Buddhist Practice in an Age of Ecological Crisis” with Karin Meyers
So Much Ephing Land: Considering Williams’s Resources
Center for Environmental Studies MENU

In response to COVID-19, activities and programs at Williams are canceled or postponed until further notice. See information and updates on Williams COVID-19 response.