WILLIAMSTOWN, Mass., May 8, 2020—The Morris K. Udall Foundation announced the award of a $7,000 scholarship to Williams College junior Mohammed Memfis. He was one of 55 students nationwide to win the award, selected for his commitment to a career in environmental justice.

Memfis, who hails from Atlanta, Ga., is interested in issues at the axis of civil rights and the environment. Having interned at the American Civil Liberties Union and the Natural Resources Defense Council, after graduation he plans to attend law school and work for a public interest organization to advance the constitutional protections of environmental issues through advocacy in state and federal courts. Ultimately, he aspires to pursue an elected office in his home state of Georgia in order to innovate and implement pro-climate and environmentally just policies.

While working with the advocacy group Environmental Entrepreneurs (E2), Memfis led delegations of business leaders from the energy, automotive manufacturing, and construction sectors into the offices of elected officials to advocate on critical policies regarding plastic pollution and recycling markets, electric vehicle infrastructure, and defense of California’s 100 percent clean energy program. 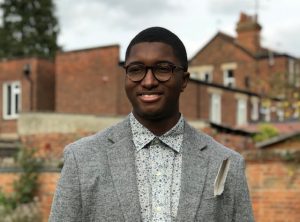 “As an environmental attorney, I plan to defend communities who experience the negative externalities of environmental trespass, whether it be industrial toxins in my own city or suing the federal government for their discriminatory storage of radioactive waste on Native American lands,” Memfis said.

While studying abroad at the University of Oxford, he was a member of the Climate Society and engaged with international leaders to develop ways to better address issues of climate change, especially on the national level. He also debated for the Oxford Union and competed on the Varsity Rugby League Team. As a Public Humanities Fellow at Williams, he researched the history of climate activism on campus and at other schools across the country. He also helped create a weeklong series of events on campus dedicated to promoting issues related to environmental justice.

At Williams, Memfis was chair of the Muslim Student Union, a member of the Black Student Union and the Williams College Law Society, and an a cappella group. He is the recipient of numerous awards and prizes, including being a Class of 1960 scholar in Environmental Studies and having previously won the A.V.W. Van Vechten Prize, 1847, for impromptu speaking.

Founded in 1793, Williams College is the second-oldest institution of higher learning in Massachusetts. The college’s 2,000 students are taught by a faculty noted for the quality of their teaching and research, and the achievement of academic goals includes active participation of students with faculty in their research. Students’ educational experience is enriched by the residential campus environment in Williamstown, Mass., which provides a host of opportunities for interaction with one another and with faculty beyond the classroom. Admission decisions on U.S. applicants are made regardless of a student’s financial ability, and the college provides grants and other assistance to meet the demonstrated needs of all who are admitted.

College events are closed to the public for now, with the exception of admission tours. Visitors are welcome outdoors and in select buildings. See the Visit page of our Covid website for full details. The site also includes health and safety information for students, faculty, staff and families.